Christine Delaney Posted on May 13, 2017 Posted in Activity No Comments 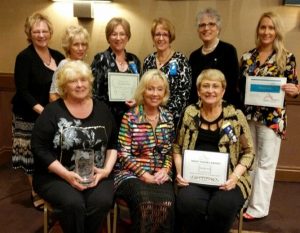 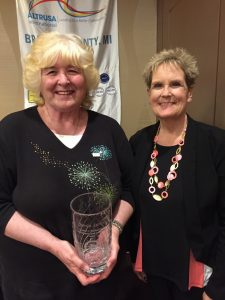 The Altrusa Teen SHARE program received the Mamie L. Bass Award for best service project of the year. This win means that the project will be placed in the running for the International Award which will be named at this year’s 100th Anniversary Celebration Convention in Nashville, Tennessee in July. This program also won the Branch County Community Service Program of the Year of 2016 as well as the District Mamie L. Bass Award in 1995 and the International First Place Honorable mention in 1997. The program is chaired by Connie Winbigler.

The Happy Feet Program, also chaired by Winbigler, was the recipient of the Leola M. Heiss Long-Term Project Award, noting that during the nine years the program has been running, the club has given away, with a lot of help from the community, over 3200 pairs of shoes and socks.

The club newsletter and club yearbooks both walked away with awards. The Altrusa Announcer, written by Christine Delaney, took the second place Ruth B. Emmons Award and the yearbook, edited by Keely Beemer and Alicia Cole received the Mary Shanks Yearbook Award.

For the second year in a row, the CHS ASTRA club, under the direction of Kristin Smith, DeAnne Hawley, and Karmen Case won the Best ASTRA Service Club Award. This past year their “Book War” pitted Michigan State fans against University of Michigan Fans and resulted in the collection of approximately 350 books which were distributed during “March is Reading” Month.

Also for the second year in a row, the club was awarded the Distinguished Club Award, based on a point system set by the District. It also received a gold cord to be added to its banner for maintaining charter strength, and received a third place Hamilton Award for the highest average meeting attendance. Several members received pins for having sponsored two or more members.

Another highlight of the weekend was when Julie Stratos, local club president, was installed as the first Vice Governor of the District and Carol Hodson, current club recording secretary, was appointed as Program Awards Chair. Karmen Case, the in-coming Branch County president, was recognized for her past two years as the District ASTRA Chair.

According to the Altrusa International website, “Altrusans provide service in our communities in various ways, with an emphasis on literacy. We build libraries, pass out free books, tutor young children, and many other literacy related activities.” In addition, Altrusa clubs focus on specific needs in their community.

Altrusa International of Branch County was instrumental in founding the Branch County Coalition Against Domestic Violence/Shelterhouse programs as well as Altrusa Teen SHARE. It is also well known for the Happy Feet Program and its focus on literacy, international relations, and scholarships for non-traditional students. They have sponsored things like the Picture Me Reading program, and the “Coloring Across Branch County” coloring book for second graders, the ASTRA Gowns for Gals and Ties for Guys Program at CHS, their seven-course dinner offering at the Tibbits Annual Auction, as well as their support of programs like Girls On The Run, Branch County Veterans, the Women’s Health Fest, Quincy in the Park, the Four Corners Park project, the Great Start Collaborative, Tommy’s House, and the American Legion Auxiliary and Girl’s State, etc. Funding for these programs come from the club’s annual Diamond Raffle and Spring Golf Outing.

Anyone interested in joining the Altrusa, can contact the club through this website or visit their Facebook page. The club meets on the first, third and fifth Wednesday at the Coldwater Elks Temple at noon.